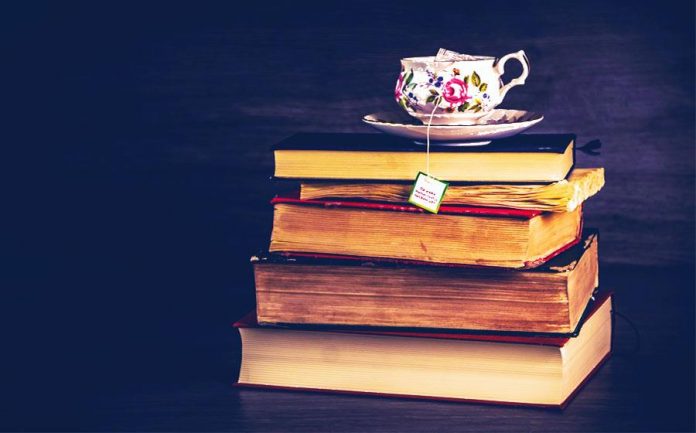 The history of tea goes way back. The discovery of tea took place in 2737 BC (over 4,700 years ago) when a strange leaf fell into the boiling water of the Chinese Emperor and herbalist Shen Nung (Shennong) while he and his servants were out in the wild.

Not knowing what had happened, the Emperor was served the beverage.

Because he enjoyed the taste of the compound, the Emperor investigated the leaf further and repeated the concept. This is when the consumption of tea was born.

Shortly after, tea was rec­og­nized for its med­i­c­i­nal qualities and eventually it was described as the “elixir of immortality”.

Today, tea is the second most popular drink around the world, right after water.

Tea as medicine in ancient times

Tea originated in China from the Camel­lia Sinen­sis bush, a dis­tant rel­a­tive of the showy, shiny-leaved camel­lia that brings glamor to gardens in the early spring.

It’s just the very tip of each branch that makes the per­fect cup of tea, and the best tea leaves are still picked by hand across the world. 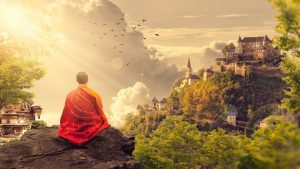 The birth of green tea. By 450 AD, tea was a rec­og­nized med­i­cine. It eventually was introduced to Japan by Monks and was documented in Japanese literature around 800 AD (9th century).

They eventually perfected a certain way of processing the tea leaves.

Instead of fermenting the leaves into their dark consistency, the monks quickly heated and dried the leaves making them a lot less oxidized than black tea. This is how green tea was born (same plant, just a different processing method).

To this day green tea is more popular in Japan than any other country in the world and continues to be a favorite beverage of the Monks due to green tea’s amazing health benefits.

China’s Tang Dynasty (AD 618-907). The story of tea continues to circa 780, and dur­ing the Chinese Tang Dynasty, the poet Lu Yu wrote the first monograph on tea called Cha Jing, (or ” The Classic of Tea.”)

At this time there was a cus­tom of donat­ing the best tea of the spring har­vest to the Emperor. With more people drinking tea, the beverage’s popularity reached across other Asian nations and started spreading from east to west.

Bricks of tea. Tea leaves in those days could be crum­bled and pressed into bricks, which meant they could be trans­ported eas­ily. The tea could then be bro­ken off as required (it is still possible to find these bricks occa­sion­ally on sale).

For the love of tea, Lú Tóng of the Tang Dynasty wrote:

“The first cup moistens my lips and throat;
The second cup breaks my loneliness;
The third cup searches my barren entrail but to find therein some five thousand volumes of odd ideographs;
The fourth cup raises a slight perspiration- all the wrongs of life pass out through my pores;
At the fifth cup I am purified;
The sixth cup calls me to the realms of the immortals.
The seventh cup – ah, but I could take no more!
I only feel the breath of the cool wind that raises in my sleeves.
Where is Elysium? Let me ride on this sweet breeze and waft away thither.”
— Lú Tóng, Tang Dynasty

Matcha tea. By the end of the first mil­len­nium in Japan, pow­dered tea was being whipped in a bowl, creating a frothy green drink very sim­i­lar to the tea made in the Japanese tea ceremonies (also called the “Way of Tea”), a tradition that is still popular today. This is what we know now as Matcha tea.

RELATED: 17 Health Benefits Of Green Tea (And The Studies Behind Them).

Tea in Europe and the West 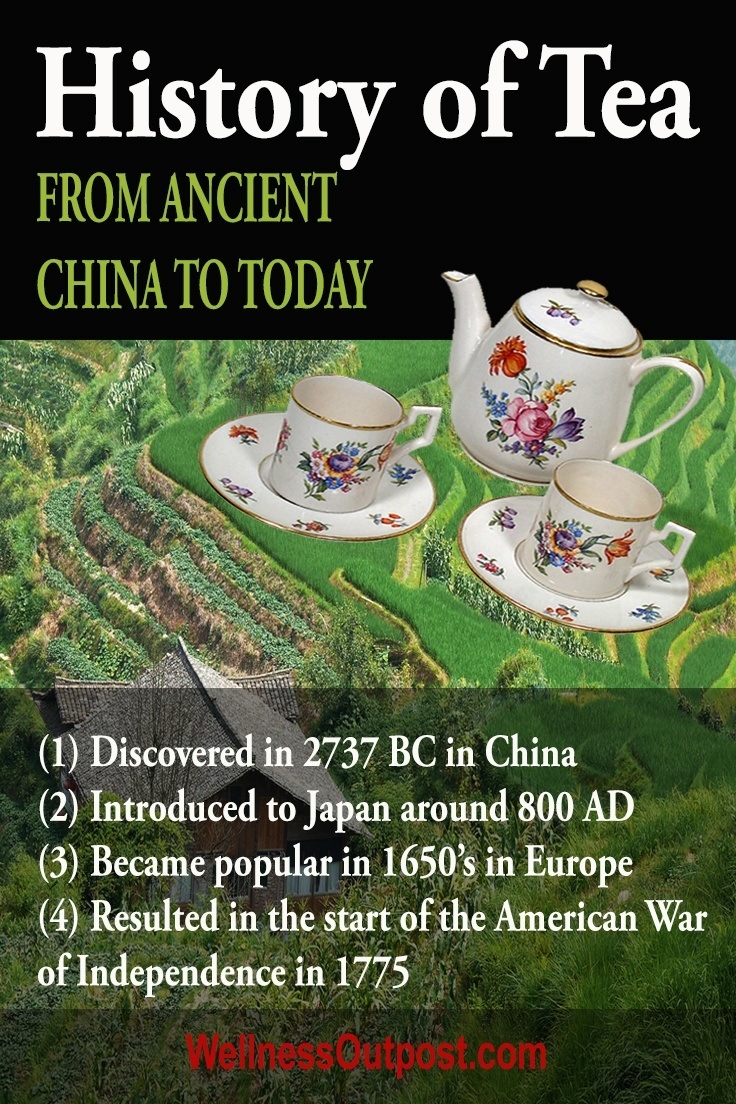 Tea caught on quickly in the West, though it’s inter­est­ing to note that the tea lovers were primarily drinking a del­i­cately per­fumed green tea, not any tea similar to the rich full-bodied black tea consumed today.

Initially, Europeans didn’t know how to make tea. In the early days, J.G. Hous­saye wrote in his “Mono­gra­phie du Thé”:

“The way to pre­pare tea was scarcely known in Eng­land except in sev­eral houses in the cap­i­tal. The widow of the unfor­tu­nate Duke of Mon­mouth sent a pound of tea to one of her rel­a­tives in Scot­land, with­out indi­cat­ing how it was to be pre­pared, and they cooked it by boiling the tea, tossing out the water and serving the leaves as if they were a dish of spinach.”

Tea for the upper class in Europe. The first tea auc­tion in Lon­don was held in Minc­ing Lane in 1657. By that time, tea was already introduced to Russia and was enjoyed by all classes in England, and the Netherlands.

In France, Italy and Spain, tea was a drink for the upper classes as they were the only ones who could afford all the del­i­cate para­pher­na­lia of exotic China.

In those days tea was pro­nounced to rhyme with ‘tay’, as in this extract from Alexan­der Pope’s “Rape of the Lock”, about Queen Anne of Great Britain who was a big fan of tea.

This was writ­ten in 1711, but from other writ­ers it looks as if usage changed soon after to be pronounced like ‘tee’. Russian writer Alexander Pushkin (1799-1837) wrote:

“Ecstasy is a glass full of tea and a piece of sugar in the mouth.”

Tea in English colonies and America

Trou­ble started when the Eng­lish colonies refused to pay tax on tea. This even­tu­ally led to the Amer­i­can War of Inde­pen­dence.

The American War of Independence. There were tensions between the colonies and the British parliament then, and it got worse with the arrival of an East India Company ship full of tea that were priced for high prof­its.

This trig­gered a historic revolt amongst colonists and the “Tea party” was born. Take a look at the brief video below from YouTube channel Simple History.

Meanwhile, all eyes were on India. The British Empire, having a strong hold on the region, had been try­ing to grow plants in India and surrounding areas. 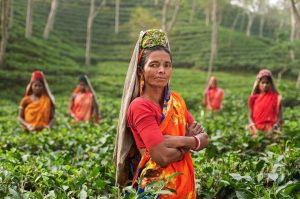 Although the cli­mate was good, the his­tory of tea with regards to grow­ing tea plants was not in the favor of the people of India. In contrast, Sri Lanka’s tea (formerly known as Ceylon) became a great source of exports of this product.

To this day, tea production is one of the main exports of Sri Lanka. If you take a look at tea boxes, you may still find the term “Ceylon Tea”, which is always synonymous with excellence.

This eventually resulted in enslaving gen­er­a­tions of Chi­nese citizens to profit from the drug, which took its toll on China, but was eventually eradicated by Chairman Mao Zedong after the Chinese revolution in 1949.

The history of tea continues and in 1839, and to spy on their com­pe­ti­tion, the British sent a Scottish botanist and traveler named Robert For­tune dressed as a Chi­nese Mer­chant to the “for­bid­den” tea regions of China. He made care­ful obser­va­tions and returned with plenty of seeds that were eventually planted in India.

Around that time, the Camel­lia Sinensis bush was found grow­ing in some areas of India, par­tic­u­larly in the Assam region. This was a glo­ri­ous day for the Eng­lish planters as they saw a thriving market on the horizon.

The branding of tea and the birth of English tea 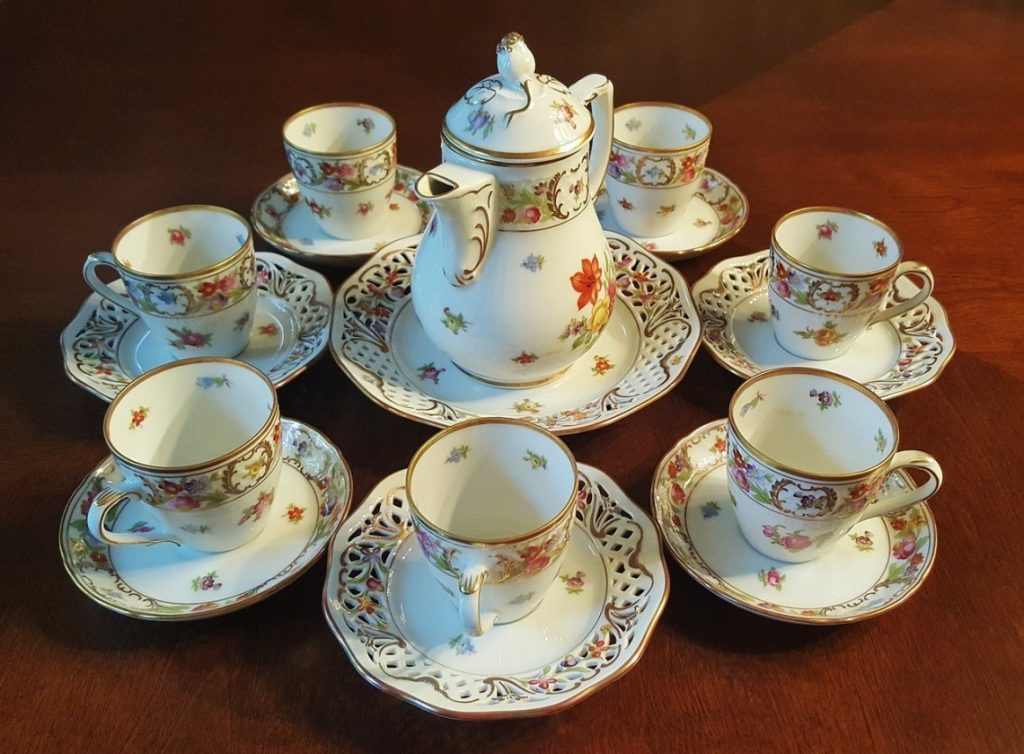 The history of tea continues when the Eng­lish started grow­ing and pro­duc­ing tea in India and in 1839 they had a fairly good crop which was bolder and blacker than the Chi­nese black tea. This is when the market of black tea was born in India.

Even though the crop was considered a success, the black tea was still harsher to drink than the Chinese black tea and needed a lot of work.

Move over Chinese tea, hello English tea. With time, tea became more refined and the first of the Empire teas was sold in Lon­don in 1839 and tea pro­gres­sively grew better and even­tu­ally dom­i­nated the black tea market around 1886. This was the year where the Chinese tea fell off its throne.

Eng­lish tea became very pop­u­lar, and the history of tea changed course, as many fam­ilies adopted the pro­duc­tion of tea for the English market. There were the Twin­ing fam­ily, The Jack­sons of Pic­cadilly, and last by not least there was Scot Thomas Lipton.

Branding tea for different markets. The name Lip­ton and Cey­lon went hand in hand. Lip­ton was a gro­cer who made a huge name for him­self import­ing tea from what was then Cey­lon (now Sri Lanka).

And this, in a nutshell, is a short history of tea. It’s now time for a nice cup of a delicious hot beverage. What tea will you choose from? Oolong? Green tea? Yerba Mate? Or the good ol’ black tea?

READ MORE: Green Tea Side Effects, FAQs (And Best Time To Drink It).

Are Air Fryers Healthy For Vegans, Vegetarians, And Plant Based Dieters?

This site uses Akismet to reduce spam. Learn how your comment data is processed.

How To Do The Fasting Mimicking Diet (A 5 Day Plan...

The Gray Rock Method For Handling A Narcissist (Scenarios & Techniques)

How To Spot A Narcissist (12 Signs Of A Toxic Person)

WellnessOutpost.com is a site that focuses mainly on meaningful relationships, well-being, and happiness. We are committed to helping you find and maintain wellness and a healthy balance in all areas of life.

The information on this website has not been evaluated by the Food & Drug Administration or any other medical body. We do not aim to diagnose, treat, cure or prevent any illness or disease. Information is shared for educational purposes only. You must consult your doctor before acting on any content on this website, especially if you are pregnant, nursing, taking medication, or have a medical condition.

We are a participant in the Amazon Services LLC Associates Program, an affiliate advertising program designed to provide a means for us to earn fees by linking to Amazon.com and affiliated sites. As an Amazon Associate I earn from qualifying purchases.

For full disclosure, click the affiliate disclaimer link on the bottom of the page.

Contact us: support [at] wellnessoutpost [dot] com
FOLLOW US
© G. Nadia Chmeissani and WellnessOutpost.com, 2017-2022. Unauthorized use and/or duplication of this material without express and written permission from this site’s author and/or owner is strictly prohibited. Excerpts and links may be used, provided that full and clear credit is given to G. Nadia Chmeissani and WellnessOutpost.com with appropriate and specific direction to the original content.
MORE STORIES